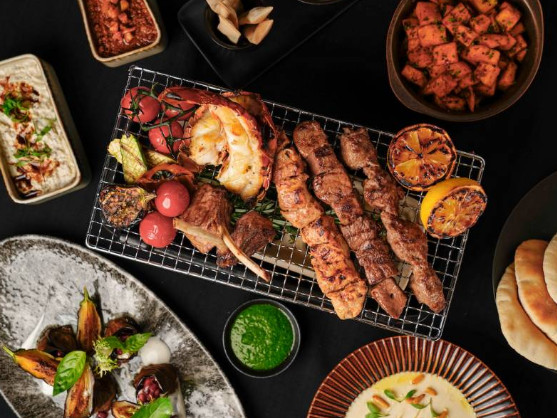 Life at Favouritetable HQ is never dull. Why would it be? – we get to speak with so many interesting and entrepreneurial people that we never stop learning. Whether it is chatting with customers on the telephone, or meeting them in person at their restaurants, we always come away feeling enlightened and – frankly – rather humbled.

The last couple of years have made it difficult to go to restaurants and meet their owners in person, but thankfully things are starting to normalise and we can now jump in the car or hop on a train to hook up with some truly influential restaurant folk. Ian, FT's Sales Manager, has been particularly hard hit by the travel restrictions so you can imagine his delight when an invitation to attend the soft-launch of a new restaurant in London popped into his inbox. Keen to have a chat with them about our restaurant management software (and, it must be said, sample the restaurant's cuisine – purely for research purposes, you understand) Ian's positive reply was swift.

The invitation had come from Lusin Mayfair, to attend the pre-opening press launch of their one hundred-seater restaurant in central London. For those not familiar with Lusin, it is a group of Armenian restaurants serving cuisine influenced by the vibrant cultures of Eastern Europe and the Levant and with sites in Saudi Arabia, and now Hay Hill in the UK's capital.

We asked Ian to share his experience of attending this event, for the benefit of Favouritetable's restaurant software customers wanting hints & tips on holding launches. Here's his account.

“I wasn't entirely sure what to expect, but I knew it would be impressive. The only slight problem was on arrival at Hay Hill. I just couldn't fathom out how to open the door. It was a solid slab of copper with no handle. For twenty minutes I prodded, nudged, rattled and even pleaded with the door but it wouldn't budge. I was starting to feel a bit daft, until the concierge turned up and pushed it at the edge, making it magically revolve – James Bond style – and hurl me into a magnificent interior. I think the concierge got the biggest tip of his career that evening.

“Inside, I was greeted by a throng of people who had clearly encountered no such problems with the door, all mingling in the magnificent entrance area. It showcases three pillars featuring hand-made carvings resembling Armenian Khachkar, which apparently represent the “Tree of Life” and “Eternity” symbols. They made for an impressive backdrop to what was billed as a soft launch and I was starting to ask myself 'if this is a soft launch, I wonder what the hard launch will be like?'

“Usually at soft launches, there is a distinct lack of formality, fanfare and ribbon-cutting. This felt different because of the attention to detail. After being propelled through the revolving door, I was greeted by Jessica from JPR Media Group who was super pleasant and did a great job of explaining what would happen, what was where, and the timings.

“What also struck me was how well-briefed all the staff were, from the food service team to the event management personnel. Everybody looked completely in-control and professional – it was deeply impressive.

“One nice touch was being introduced to Mohammad Rashwani, Director of Operations at Lusin's parent company Mira Foods. He was very personable and non-intrusive but spent just enough time explaining the concept of their restaurant. After a brief chat about their restaurant management software, it was time for the food.

“I must say, how well restaurants coordinate their food service at events like this never fails to impress me. It is amazing how one minute you're chatting about revolving doors with your table neighbour, and the next a waiter has appeared as if by magic and is silently and gracefully serving you a first course. With a hundred seats the net effect of this seamless service was something akin to a ballet. The timings were spot on and nothing went wrong. I'm sure the service team must have been through a number of rehearsals and, of course, relied heavily on their restaurant reservation management software to optimise tables and covers.

“And what food! The London menu has been curated by 2 Michelin-star chef Marcel Ravin. and features innovative dishes such as a cherry kebab made from spiced kebab skewers, perfectly charcoaled, and then covered with their signature home-made cherry sauce . The Lusin Salad is made with shredded cheese topping a smoky-baked Aubergine, with vegetables and herbs coulis. I could go on, but suffice to say it was all incredible and beautifully presented.

“During the meal we had the opportunity to chat and listened to key speakers from Lusin, who gave a great overview of their group's roots and ambitions. After dessert it was time for coffee, and all too soon, carriages.

“All in all it was a wonderful evening, just like a launch event should be” said Ian.

To your FT blogger it sounds like Ian had a great time. But we wanted to know whether there was anything the restaurant could have done better, for the benefit of other Favouritetable customers planning a launch event. We'll leave the wrap-up to Ian:

“Honestly, no. This was an incredibly well planned and executed event, successful largely because of attention to detail, their use of technology and extremely professional staff. They had obviously planned for every eventuality and rehearsed the running order to perfection, plus of course paid great attention to their audience. Everything ran like clockwork, people were personable and the food really hit the spot.

“The launch of Lusin Mayfair was, as far as I could see, a great success and served its intended purpose of putting the restaurant squarely on the map. For a soft launch it exceeded expectations and I will certainly be booking a table and dining there again soon, although I might try to find an alternative entrance!”

We would like to thank Ian for his assessment and hope it is useful for Favouritetable users looking to host similar events.

Sign up to Favouritetable by 1st December and get it free* for a month.

*Ts&Cs apply. Requires sign-up to a paid subscription to Favouritetable and any optional modules.  Free for first month, payments will commence from month two.